My baby was due yesterday. Here’s why I’m still working (and why that’s ok)

Yesterday my due date (and my birthday, incidentally) came and went, as they often do with first babies. It marked the start of what I’m optimistically calling my ‘baby holiday’. Only it’s not what you might expect: I’m still working.

This was actually the fourth adjusted date of the start of my baby holiday. Initially, I had intended to stop working a week before my due date, then the Friday before, then the Monday. When I attempted to stop working the day before the baby was due to arrive, I learnt three things: it’s ok to ignore advice (even if it’s given with love and the best of intentions), ‘relaxing’ doesn’t look the same to everyone and it’s great to love what you do.

An avalanche of advice

Just like every other pregnant woman in history, I’ve been showered with advice for the last nine months. Eat this, don’t drink that, go for a walk (but not too fast), relax, stay active… But nothing compares to the opinions people have shared about working during pregnancy.

My approach – which is basically to work for as long as possible and see how it goes after the baby’s born – has resulted in an array of reactions, from support (it’s so great you can be flexible!) to amusement with a hint of condescension (oh really? You think you’ll be able to do that?) to downright anger and disapproval (that’s really bad for you and your baby).

This mix of reactions isn’t new to me. As a freelancer, there is no clear divide between my ‘life’ and my ‘work’ (which suits me brilliantly, because my work – writing – is what I like to do for fun). This situation isn’t ‘normal’ – I don’t work to live, my work is just a part of my life – and that makes it difficult for many people to understand. If I had a penny for every time someone’s told me to slow down, take a break or have a day off, I’d have enough to kick back with a G&T (post-baby, of course). 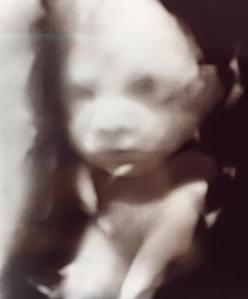 But add a bump into the mix and it all gets a bit emotional. People started to worry about my wellbeing and the health of my baby. Surely all the stress of working can’t be good. If you were employed, you’d have to give up work a month before your due date, there must be a sensible reason for that rule. You really should switch off and spend time nesting and thinking about babies instead of writing about pesticides and bees, tuna slaves and urine fuel cells.

Eventually, the voices set up camp in my mind and I compromised: I’d start my baby holiday one week before my due date. That day arrived much more quickly than I’d expected, and I still had several articles to write, a book to edit and a load of invoicing to do. So I postponed. Just one more article. One last document. A couple more emails. Then there were no more excuses.

The day before my due date I got up early and sat down with my sewing machine (which I’d never used before) ready to turn some curtain cut-offs into a cushion for the cats to sleep on. Two hours after starting I admitted defeat and moved to the living room with a cup of tea, a needle and thread and How to Make a Murderer on Netflix. I made a little catnip toy and a tiny felt heart filled with lavender. They were both a bit rubbish.

I felt completely empty. Useless. Pointless. I wanted so much to be enjoying myself, relaxing and doing something creative (why sewing? No idea…) but I was just bored and frustrated. I watched my lovely Facebook friends send me thoughtful, caring messages in response to my ‘look how crap I am at sewing’ post, urging me to stop doing stuff and just kick back with a cuppa. Rationally I understood, and even agreed with, their comments. But I still sat there feeling guilty, conflicted, confused and bored.

When my husband walked through the door that evening, he knew exactly what had happened. ‘Why don’t you do some work tomorrow?’ he suggested.

At that moment the day’s three lessons hit me hard. I became a freelancer almost 18 months ago so I could make a living doing what I love: writing. Writing makes me feel excited and happy. It makes me feel useful and fulfilled. And it relaxes me. Sure, sometimes deadlines can be stressful, especially if they pile up. But I thrive on the pressure (and stress can be good for you anyway).

And I’m not good at sitting still; for the last few years not a single day has gone by when I haven’t done something. No PJ or TV days, and when I do watch a film (or, I admit it, the occasional soap) I’m usually writing or editing something at the same time. When I’m not writing, my version of relaxing is seeing how many things I can tick off my to do list.

Of course I wasn’t happy when I tried to do nothing. It’s not right for me; I was trying to do other people’s version of relaxing and getting ready for a baby. Advice is there to advise, not to instruct, but I’d let myself get swept along with the wave of opinions and hadn’t stopped to think about me. The 9-to-5 office job doesn’t suit me, so it makes perfect sense that the ‘normal’ approach to maternity leave doesn’t either.

Despite what people have been saying about me needing to slow down since I went freelance – and particularly over the last nine months – I’ve come to realise what my husband already knew: what I need is the opposite. I need to feel useful and busy, to keep ticking things off my lists and adding new things. I need my own version of a baby holiday.

Of course I have no idea what’s in store for me in the next few hours, days, weeks and months. But finding out is half the fun, right?