My January invention challenge: a word a day

In the second half of 2014, a good friend of mine (and a fantastic designer – check out his stuff) set out on a challenge: to master a new 3D image tool by creating a new image every day for 100 days. It was a huge success. I’ve rather over-simplified that, but the thing that really got my attention was doing something every day until you’re great at it. 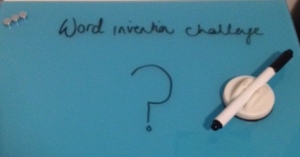 I’m not a designer, but one thing I’m very interested in is the design of words. Contrary to popular belief, language does evolve; we can shape the future of our words and their usage. People – me included – are hesitant to do this. But you know what? I think it’s time to get inventive with the alphabet and inject some creativity into our words. One person who can wax lyrical on this topic is the wonderful Erin McKean – lexicographer and maker of online dictionary Wordnik.

In her TED talk, Erin explains that we should invent new words because “every word is a chance to express your idea and get your meaning across. And new words grab people’s attention.” I completely agree. Creating a new word has been on my to do list (silly, I know) for years and I’ve always avoided it. Not any more.

In January 2015 I’m challenging myself to create a new word every day. I’ll be honing my word inventing skills using a variety of techniques, including the six that Erin shares in her talk:

I’m not going to challenge myself to 100 new words, and I’m not under any illusion that I’ll get good at inventing words during the course of this challenge. Instead, my aim is to break out of my avoidance and fear of word creation, and to have some fun.

So every day in January 2015 I’ll make up a new word. I’m going to need your help, so I’ll share my words on social media and ask for your opinions. I might even do a weekly vote for the best word.

Keep your eyes peeled – the first word will appear on 1 January 2015!